What are Candlestick Patterns?

A Japanese candlestick is like a bar chart, but it relays much more information to the analyst. These patterns can be evaluated using charts that are supplied to you by Rakuten Securities Australia. The candlestick pattern requires that you have an open, high, low, and close of a specific period. To analyze a candlestick bar, you need to wait for the close of the period, whether its daily, weekly, monthly, or intra-day. When the open is higher than the close the body is generally red or black. When the open is lower than the close the body is colored green or is hollow. The Japanese Candlestick can be colored to make it easier for the analyst to read. The body of the candle is the difference between the open and the close. The high and the low, which are above and below the body, are called the wicks or the shadows. Several trading strategies are developed out of candlesticks. Some reflect reversals while others focus on continuation. The most famous patterns are: 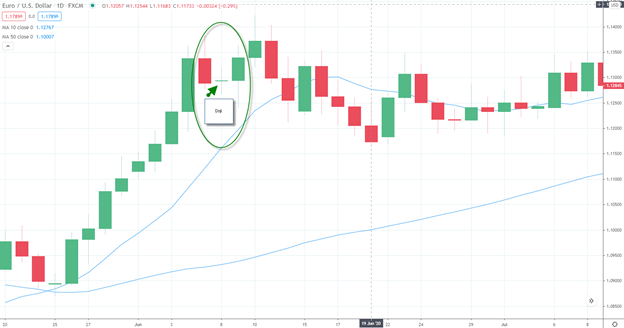 There is a plethora of information that can be relayed to the investor via a candlestick pattern. The key to determining if a pattern is bullish or bearish, or a reversal or continuation pattern is the value of the open, high, low, and close relative to each other. Many candlestick patterns require 2 or more days. One of the most basic is the doji candlestick pattern. A doji pattern is a sign of indecision and is helpful to investors as it tempers their bullish or bearish tendencies. A doji is considered a neutral pattern because the open and the close of a specific period are the same. The doji pattern alone can tell you that the market is unsure. When combined with multiple candlesticks, it sheds light on the future direction of a currency pair. One of the best ways to evaluate a doji pattern is to analyze the prior candles or the market trend before reaching the doji. For example, when a doji pattern occurs after a bullish advance, you know that the market might be consolidating and that momentum is weakening. The same can be true in a downtrend. When a doji occurs, you know that negative momentum is lessening. The doji tells you that bullish and bearish sentiment is beginning to equalize.

The wicks of the doji can determine if there is volatility. When the wicks are long but the open and the close are at the same level, this tells you that there is market volatility but still indecision. When there is a short-legged doji, you can tell there is consolidating of the trend and low volatility.

A dragonfly doji looks like a “T” where the open and the close are at the high of the trading session (or period). This tells you that traders attempted to take an exchange rate lower but were unsuccessful. The prior periods can be helpful when evaluating a dragonfly candlestick. If prices were trending lower, this could be a sign of a reversal, similar to an outside day. The reverse of the dragonfly doji is the gravestone doji. This looks like and upside-down “T” were the open and the close is at the low of the session or period. Like the dragonfly candlestick, to analyze the gravestone doji, you need to know about the candles that occurred before the gravestone doji.

A reversal pattern is a pattern that signals either a top or a bottom. The two most widely used reversal candlestick patterns are the star pattern and the inverted hammer. Both patterns require confirmation following the onset of the candlestick pattern. Both patterns have similar traits, like small bodies and long wicks. In several cases, the length of the wick is more than double the length of the body. The star candlestick usually gaps on the open away from the prior close, and it is often referred to as a shooting star. The candle appears to oscillate from prior candles. 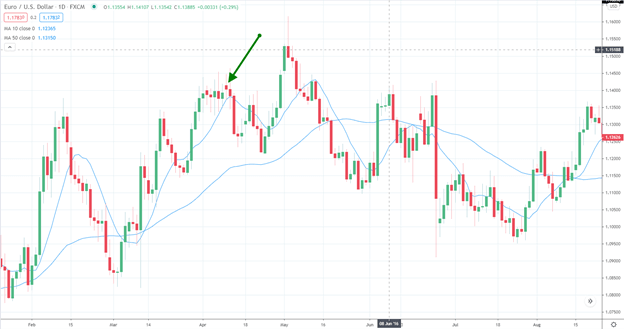 The shooting star candlestick pattern will happen at the end of a rising trend in a Forex pair and the close is lower than the open (red body). It occurs as the end of an uptrend and the close is lower than the open. The reverse of the shooting star reversal which occurs as the end of an uptrend, is an inverted hammer which occurs at the end of a downtrend. Two other reversal patterns are called the hammer and the hanging man. Similar to other doji patterns, they require confirmation. Both of these patterns have small bodies and long lower wicks. The hammer candlestick pattern occurs at the end of a downward trend. After testing lower levels, the exchange rate rebounds to close near the open. The reversal of the downtrend culminates in a close near the high of the trading session which will tell investors that many traders are willing to go home with a long position in a currency pair. The reverse of the hammer is the hanging man, which is a bearish reversal pattern that follows an uptrend. The hanging man has a long upper wick and a small body and culminates in selling pressure on a high volume which closes on the low of the session.

There are dozens of candlestick patterns that can help you analyze and determine the future direction of a currency pair. The candlestick pattern evaluates one or more periods and can determine both indecision, reversals, and continuation patterns. When the body of the candle is green or hollow, the close is higher than the open. When the open is higher than the close, the body is either red or black. This provides more information than a standard bar or line chart. The most widely used candle pattern is the doji pattern, where the open and close are at the same level. Attached to the body are the upper and lower wicks. This can help with an analysis of a reversal or continuation pattern. A hollow or green candlestick generally represents upward buying pressure while a red or black candle represents selling pressure. Many candlestick patterns require confirmation and can help you develop robust trading strategies.