Established by stock market analyst Ralph Nelson Elliott in the 1930s, the Elliott Wave is a technical analysis pattern used by traders to predict market price movements. Elliott held the belief that there was a pattern to the seemingly chaotic movements in market charts and set out to trace it by deriving the Elliott Wave Theory.

What is the Elliott Wave Theory?

The Elliott Wave Theory is founded on the idea of crowd psychology as a market mover. Elliott believed that it is not political and financial news itself that causes changes in market price movements, but investor reactions to such news. The theory postulates that people, with our oscillations of optimism and pessimism, are the actual driving forces of financial markets. The theory also proposes that these oscillations are bound to repeat themselves in cycles, which means that market price movements are, too, bound to repeat themselves accordingly. These repetitions culminate and make up a pattern. In financial markets, price movements in a pattern are labelled as waves. Each wave is a movement in one direction on the market chart. Traders apply the theory in chart analysis to predict price movements and to get an idea of when to buy and sell. The Elliott Wave theory also postulates that the nature of these chart patterns is fractal. This means that aside from the pattern repeating itself infinitely, it will also occur on different scales, with each pattern containing smaller versions of the same pattern within itself. We will explore this later.

The Elliott Wave chart pattern consists of 8 waves in total that can be divided into 2 broad phases: motive and corrective, both of which contain individual sub-waves that are impulsive and corrective in character. 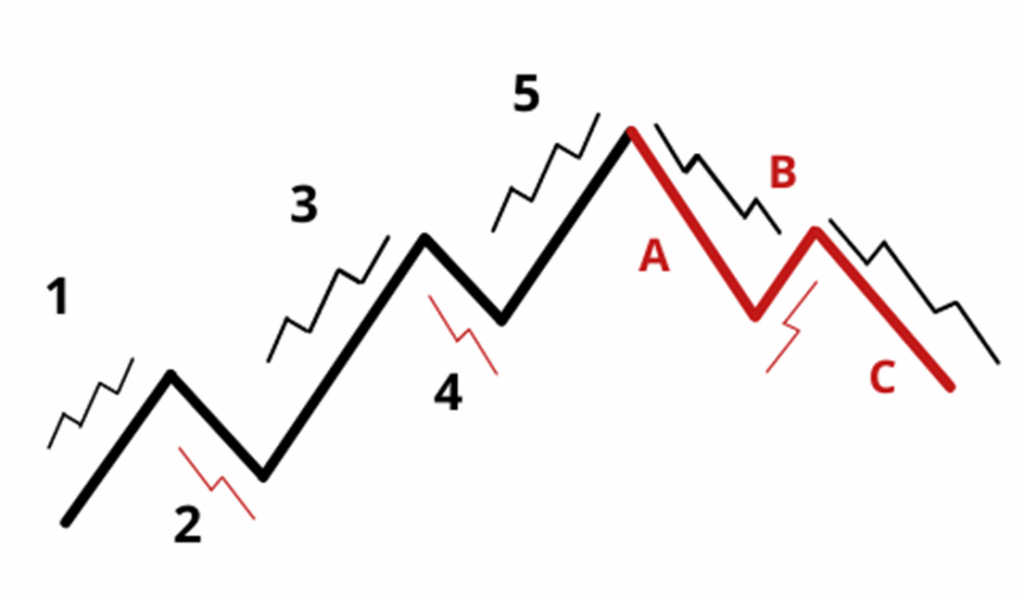 Motive waves make a net movement in the direction of the main trend. These are the first 5 sub-waves, numbered 1 to 5. You may have noticed that while motive waves are said to travel with the main trend, the individual sub-waves actually alternate between uptrend and downtrend. Sub-waves 1, 3, and 5 are impulsive in character and go with the prevailing trend, while Waves 2 and 4 are corrective in character—they are smaller retracements of Waves 1 and 3 respectively, and they dip in the opposite direction. There is a logical explanation for the movement of motive waves:

The pattern in real-time charts

There are four fundamental rules that all patterns abide by theoretically, in a bullish market:

In a bearish market, the rules are reversed. These rules govern the theory and provide a good basis for the identification of the Elliott Wave pattern in a market chart. However, as mentioned, market price movements do not always end up following these rules too strictly. Some technical analysts are flexible in their interpretation and application of the theory and only use it as a basis for analysis, and they accept occasional deviations from the rules.

The fractal nature of chart patterns